Changing lives for the better

10 Years of ONEWhingz of Change!

This is still such a blur to me. I had no idea that our network of friends, colleagues and genuinely good people had got together, without our knowledge, and put together a golf day for our son Mark, who had just been diagnosed with kidney cancer.

I was only told “to be at Copperleaf next Wednesday morning”. Nothing else. When I arrived that’s when the blur set in.

I still look at the pictures today and cannot believe the people who, at 2 weeks’ notice, dropped everything in their lives, to be there for Markie. In my haze of surprise and confusion, I can’t actually remember everyone that was there. But, as parents, SK and I will always be grateful to our dearest friends for stepping up for our boy. Over R660 000 was raised that day. Just about enough to cover Mark’s treatments.

And then there was Dozi, and his concert at his venue … and the numerous donations. It not only made sure that Mark’s treatment needs were taken care of. It also led to the creation of ONEWingz of Change, which celebrates it’s 10th birthday in April!

Click here to see some pictures of our last 10 years! Here's a few more pictures! And just a few more! 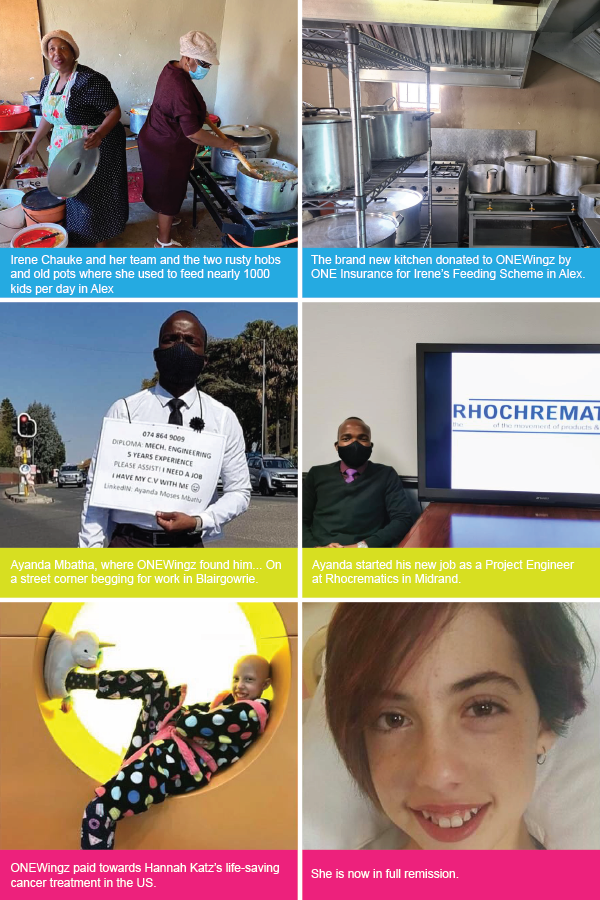 After leaving Jacaranda FM and his JustPlain Breakfast Show in 2011, Darren Scott and his team took the concept to his new online project, XVR Ballz Radio in 2012. Click here to read the story of Darren’s son Mark Scott Schwab and how OneWingz of Change came to be.

Since then OneWingz has raised over R10 000 000, done over 400 activations each week, delivered 5 brand new homes to families previously living in shacks, taken people off the street and given them an education, which realised jobs in anything from team management to electrical engineering or nursing.

ONEWingz changed the lives of thousands of desperate and struggling people for the better, whether it be through paying for medical expenses (two of OneWingz advanced-stage cancer recipients have recovered into remission thanks to the treatments they needed being funded by OneWingz), unpaid bills, education bursaries and assistance, food and grocery vouchers, as well as restoring run-down shelters, providing a full canteen for a 1000 child feeding scheme in Alex, and assistance for community centres, special needs schools and communities all over Gauteng.

This could not have been possible without the support of all our partners – especially The Courier Guy, One Financial Services and Mix 93.8 FM – as well as those individual heroes, who anonymously donate funds and services to OneWingz.

We are very proud to celebrate our 10th birthday, but expending OneWingz to a second activation per week, which will realise an additional nearly R 1 million distributed throughout our community to change lives for the better!

Read all about our exciting new initiative with Tsogo Sun


Some of our latest activations

Ayanda was on a street corner in Blairgowrie when OneWingz heard about him. He is now a team manager at Rhocrematics in Midrand!

This is where Nonsikelelo Tshazi used to live. Thanks to oneWingz Mandela House Project, both she and her nominator received 2 brand new homes in Westonaria in 2020!