Changing lives for the better 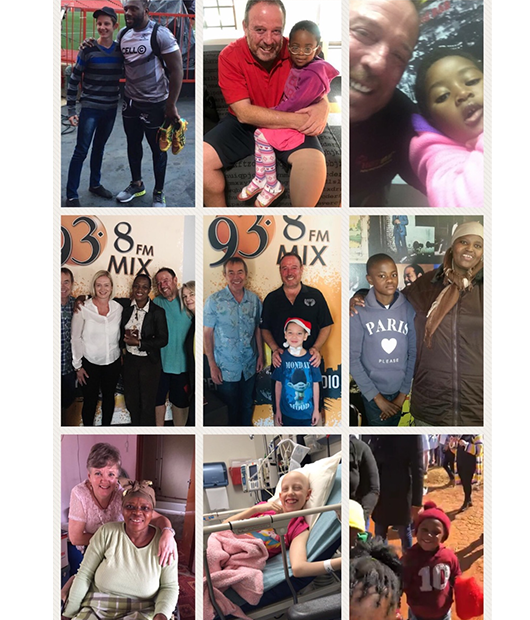 OneWingz was born out of Darren Scott’s previous radio project: Good Morning Angels” – where he and Di Broodryk assisted the needy in the same way, on Jacaranda FM. When Darren left Jacaranda in 2011, his Angels Golf Event alone had raised over R3,5 million in just 4 years! ALL of these funds were used during that period, to change peoples’ lives for the better.

One NEVER knows the potential in people around us, no matter how desperate their lives appear to be.
Darren Scott

OneWingz was born out of Darren Scott’s previous radio project: Good Morning Angels” – where he and Di Broodryk assisted the needy in the same way, on Jacaranda FM. When Darren left Jacaranda in 2011, his Angels Golf Event alone had raised over R3,5 million in just 4 years! ALL of these funds were used during that period, to change peoples’ lives for the better.

In 2012, Darren wanted to continue the work done by Angels, through an initiative of his own. His dream came true in a very tragic way. His son, Mark, who was only one at the time, was found to have cancer in his kidney, and needed treatment right away. Darren’s medical aid refused to cover the costs, and Darren’s network of friends and colleagues got stuck in, to raise funds so that Mark could undergo the treatment he needed. Golf Days and Concerts realised around R 1,5 million Rand in a very short space of time, and Mark’s needs were covered through the newly created Mark Scott Trust.

Mark made a full recovery (now a healthy 10 year old boy!) and the costs required to make this possible came to around R1million. This left about R 500 000 in the Trust.

With the funds left over in the Trust, the Trustees – of which Darren was one – decided to change the constitution of the Trust, to enable Darren to further the dream of helping others, particularly those who were in similar circumstances as he was with his son, yet didn’t have the network of friends and family who had the means to achieve this.

Thereby, through Mark’s Trust, OneWingz of Change was born, where people from all walks of life, who were facing any challenge – not just medical like Mark’s, but financial, education, housing, unemployment – whatever the deserving case, OneWingz aimed at stepping in to change these peoples’ lives for the better.

Since 2012, OneWingz – again through the OneWingz Golf Day, (which celebrates it’s 14th year in 2021), as well as numerous generous donors over the years – has raised over R 10 million!

Every week, emails pour in from various people across the country, either nominating themselves, or someone they know or know of, asking for assistance for various challenging life situations. These range from people living on the street, or shacks, to those who have lost everything through fire, flooding or robbery. Medical issues, education, pursuing their dream to study, or people that are just snowed under by debt because they have either lost, or can’t find jobs – this is the range of requests received weekly.

Many of them are from people who are comfortable in their life circumstance, yet encounter complete strangers who aren’t.

An example of one of the many, is a lady who filled her car up weekly at a service station, and was attended to by the same attendant every time. She decided to ask about his life circumstance, and what he actually dreamt of becoming, and he replied that he was working “pumping gas” because he had his entire family of 5 to look after, and he also dreamt of studying mechanical engineering. He knew that the petrol attendant job would only allow him to scrape enough together to feed his family, and had all but given up on his study dream.

The lady contacted OneWingz, and we, in turn, contacted him, and spoke to him on our weekly OneWingz slot on radio, about his circumstances. OneWingz sponsored him a bursary to start studying mechanical engineering, which he did. He passed his first year with flying colours! As a result the institution gave him a bursary of their own for the remainder of his course! He succeeded with distinction and is now following his dream.

Through OneWingz, and our radio platform, always encourage people “who have”, to show an interest in the lives of those “who have not”, even if they are complete strangers. One never knows what their dreams are, and through showing a small bit of interest, something like this can be achieved. We have found that, particularly when it comes to people who cannot afford their education, once they receive that helping hand, the stress of battling to pay for it is alleviated, and it allows them to focus on their studies. 90% of our beneficiaries in this regard, have passed with flying colours, and over 50% have received bursaries from the institutions where they have done their first year or phase.